I Was Named For Coach Bryant 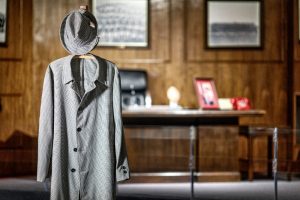 The tradition of Coach Paul “Bear” Bryant lives on–not only in Alabama but also throughout the country.  Each fall Pauls, Williams, Bears and Bryants from dozens of states converge
on the University of Alabama campus to attend the Paul W. Bryant Museum reunion party honoring those named for the legendary football coach.  The reunion party begins each
year three hours before the kickoff of Alabama’s first home game.

Bear Bryant’s career as head coach of the University of Alabama spanned 25 years during
which he became one the most acclaimed coaches in college football history.  Bryant
won a record 323 career games and six national championships.  He was voted National
Coach of the Year three times.

Bryant was such a tremendous influence on the people of Alabama during the 25 years
he led the Crimson Tide as head coach that many people named their children after
him.

It Made Papa Proud!

The idea to locate and bring together those named for coach Bryant came from his first
namesake, his son.  Paul Bryant, Jr. said “Papa knew from the letters he received
that children were being named for him.  It made him proud.”  The call went out through
the media and in the first three months the Museum had been contacted by over 350
namesakes.  The first reunion was on September 14, 1996.

The Party Is Great!

Music, food, fun and prizes are always part of the plan.  “I was named for Coach Bryant”
is the standard introduction.  Numerous media outlets including People Magazine have
covered past reunions.  Plans are made and invitations are sent to each person on
the Museum’s Namesake database.

Thanks To Our Sponsors!

Thank you for contacting us! We have a database of those named for the legendary Coach Paul William “Bear” Bryant. Please complete and submit the following form to add your name to the list! You can also print and return to the Bryant Museum, Box 870385, Tuscaloosa, AL 35487 or FAX to 205-348-8883.