“Mr. W.G. Little, of Livingston, Ala., was the first man to introduce football at the University. Mr. Little had been a student at 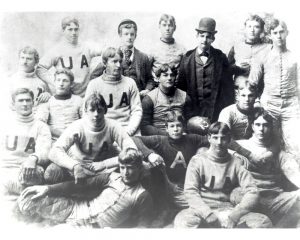 Andover, Mass., and went to the University (of Alabama) carrying his uniform and a great bag of enthusiasm for the game in 1892. A number of students joined in with him in the season beginning in October of that year.”

Alabama’s first game was played in Birmingham on Friday afternoon, Nov. 11, 1892, at the old Lakeview Park. Opposition was furnished by a picked team from Professor Taylor’s school and Birmingham high schools, with Alabama winning, 56-0. Early teams were a bit tougher than current squads, it seems, as the following afternoon Alabama played the Birmingham Athletic Club, losing 5-4 when Ross, of B.A.C., kicked a 65-yard field goal. Impossible though it may seem, this field goal was listed as a collegiate record at one time and Birmingham papers of the day featured its distance in write ups of the game.

The gridiron sport rapidly caught the students’ fancy and the game became a favorite with University athletes. In 1896 the University’s board of trustees passed a rule forbidding athletic teams from traveling off the campus. The following season only one game was played and in 1898 football was abandoned at Alabama. Student opposition to the ruling was so strong that the trustees lifted the travel ban and football was resumed in 1899, to continue without interruption until the First World War forced cancellation of the 1918 games.

Alabama first gained national recognition in 1922 when the University of Pennsylvania was defeated, 9-7, in Philadelphia. The following season Wallace Wade became head coach and in 1925 led the Crimson Tide to its first undefeated and untied season and its first Rose Bowl invitation. On Jan. 1, 1926, an unheralded, underrated team from Tuscaloosa came from behind to upset Washington, 20-19, in the Rose Bowl and established a precedent of colorful play that Crimson Tide teams have continued to uphold. 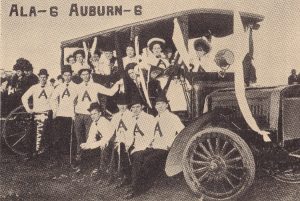 In early newspaper accounts of Alabama football, the team was simply listed as the “varsity” or the “Crimson White” after the school colors.

The first nickname to become popular and used by headline writers was the “Thin Red Line.” The nickname was used until 1906.

The name “Crimson Tide” is supposed to have first been used by Hugh Roberts, former sports editor of the Birmingham Age-Herald. He used “Crimson Tide” in describing an Alabama-Auburn game played in Birmingham in 1907, the last football contest between the two schools until 1948 when the series was resumed. The game was played in a sea of mud and Auburn was a heavy favorite to win.

But, evidently, the “Thin Red Line” played a great game in the red mud and held Auburn to a 6-6 tie, thus gaining the name “Crimson Tide.” Zipp Newman, former sports editor of the Birmingham News, probably popularized the name more than any other writer.