Bryant-Denny Stadium is quickly becoming one of the most prominent college football
venues in the nation. Located on the southwestern edge of the University of Alabama
campus, the history-laden stadium will rank among the nation’s top 5 on-campus football
stadiums upon completion of the latest expansion in the summer of 2010. 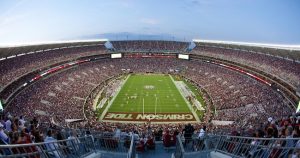 The evolution of Bryant-Denny Stadium has been significant from its origins back in
1929 when 12,000 seats were erected for a Crimson Tide team coached by Wallace Wade
that featured an All-American lineman named Fred Sington.

In the 1930s, during the heart of the Frank Thomas Era, Denny Stadium increased in
size to approximately 24,000 in a time that the Crimson Tide featured the legendary
Don Hutson.

After Alabama’s perfect season in 1945, which included a Rose Bowl win over Southern
California, bleachers were added for the 1946 season. A record crowd of 31,000 watched
the Harry Gilmer-led Tide beat Southwestern Louisiana, 54-0, on October 12 to dedicate
the largest stadium in the state.

When Paul Bryant returned to Alabama in 1958, Denny Stadium had remained untouched,
but the legendary coach mapped out details for an additional 12,000 seats and a new
press box with an elevator that was completed for the run to the national title in
1961. In the first game with 43,000 seats, the Tide beat North Carolina State, 26-7,
October 14.

Noteworthy that autumn afternoon was the fact that the Wolfpack, led by future NFL
superstar Roman Gabriel, jumped to a 7-0 lead. It would be the only time Alabama would
trail an opponent all year long.

During the summer of 1975, Bert Bank, who had matured from a teenage fan to a World
War II hero to a state senator, used his political clout to have the stadium re-named
Bryant-Denny Stadium and on April 10, 1976, during the annual A-Day game, the official
dedication took place.

Bryant-Denny experienced a first on November 17, 1979, when ABC, with Al Michaels
calling the play-by-play, aired the first live television game from campus. Other
on-campus stadiums had outpaced Alabama in refurbishing and expansions, as the Crimson
Tide continued to play most of its key games at legendary Legion Field in Birmingham.
That would change dramatically in the 1980s.

After playing its entire home schedule at Legion Field in Birmingham in 1987, the
Tide returned to a 70,123-seat configuration in 1988. It was also the first season
of Tide Pride and in the home opener; Alabama beat Vanderbilt, 44-10, on September
24.

Ten years later, and nearly four years after the planning stages began under Director
of Athletics Hootie Ingram in 1994, the east side expansion was completed, upping
the capacity to 83,818. Brigham Young served as the opponent on September 5, 1998,
in a night game that featured a five-TD effort by Shaun Alexander in Alabama’s 38-31
victory. Included in the 1998 east side expansion were 10,000 bleacher seats and two
spiral walkways to give the stadium a more symmetrical appearance. A total of 81 skyboxes
(on two levels) were also added.

In 1999, four additional skyboxes were added and a scoreboard with video replay capabilities
was added to the south end. Other recent additions to Bryant-Denny Stadium include
two east side reception areas for Scholarship and A-Club level patrons. These areas
are located above the center entrance on the east side and include rooms large enough
to host receptions and pre-game meal functions. A bank of lights was also added on
the east side.

The North End Zone project, which began immediately following the 2004 football season,
featured the addition of the North End Zone (“The Zone”) complex which added more
than 8,000 bleacher seats, added three levels of premium seating, a pair of large
video scoreboards and state-of-the-art wrap-around display boards on the facades of
the east and west upper decks. A unique addition to the stadium was a plaza connecting
the stadium with University Boulevard. Known as “The Walk of Champions”, the plaza
quickly became a game day focal point and honors Alabama’s national championship coaches
while commemorating the school’s 13 national championships and 22 SEC titles.

That expansion added 38 luxury skyboxes (bringing the total number of skyboxes in
the stadium to 123), a club level area and traditional upper deck seating, a new home
team locker room and a revamped sound system. When Alabama and Hawaii met to open
the 2006 season, a sellout crowd marked the largest crowd to view a college football
game in the state of Alabama as 92,138 fans packed the stadium.

The 2009 season was only the ninth time in the stadium’s history that Alabama has
played all of its home games at Bryant-Denny Stadium. From 1900 until 2003, Alabama
played at least one home game at Birmingham’s Legion Field. The Crimson Tide owns
an impressive 225-46-3 (.827) all-time record in Tuscaloosa as more than eight million
fans have witnessed the Crimson Tide play in 105 home games over the last 19 seasons.

By the fall of 2010, the structure will host 157 skyboxes, four large video scoreboards
and wrap-around display boards on the facade of both the west and east grandstands.

Paul W. Bryant
Paul William Bryant (1913-1983) returned to Alabama as head football coach in 1958
after playing for the Tide from 1933-35 and serving as an assistant coach from 1936-39.
The Bryant Era at Alabama spanned more than a quarter of a century. Bryant-Denny Stadium,
Bryant Hall, the Bryant Conference Center and the Bryant Museum stand as reminders
of Bryant’s unparalleled winning legacy to the University.

Dr. George Denny
George Hutcheson Denny (1870-1955) accepted the presidency of The University of Alabama
on January 1, 1912. He began an extraordinary presidential career that spanned almost
a quarter of a century. Denny Chimes and Bryant-Denny Stadium stand as reminders of
Denny’s legacy to the University.